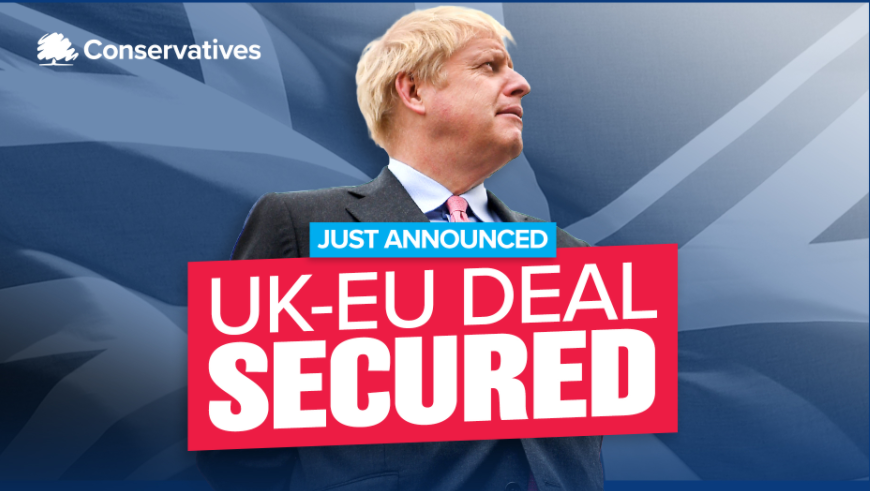 We have secured an excellent deal for the United Kingdom, which delivers on what the British people voted for both in the referendum and the last election.

As we promised, this deal takes back control of our laws, borders, money, trade and fisheries – and it ends any role for the European Court. From 1st January 2021, the United Kingdom will have political and economic independence. And we will thrive as a country now outside the European Union.

We will enter the new year as a sovereign nation. 2021 will be our opportunity to show what Global Britain means to the rest of the world: striking trade deals with new markets. Reasserting ourselves as a liberal and free trading nation. And acting as a force for good in the world.
‍

Our EU trade deal makes good on our pledge to protect and boost our economy and provides for continued market access across a broad scope of key service sectors, including professional and business services.

Our EU market access will support new and continued investment between businesses. It also means that business travellers will be able to easily move between the EU and the UK for short term visits and the agreement on financial services ensures financial stability and consumer protection.

Our trade deal also allows us to introduce our own subsidy system so that we can better support businesses to grow and thrive. This new subsidy regime will operate in a way that best suits the interests of UK industries – fundamentally different from EU State Aid.

And it supports our primary objective of prioritising the safety and security of the UK’s citizens. It offers streamlined co-operation on law enforcement, ensuring we continue to effectively tackle serious organised crime and counter terrorism, protecting the public, and bringing criminals to justice.

It also provides for future cooperation between the UK and EU on emerging security challenges, such as cyber and health security, including continuing to work together on tackling the spread of Covid-19.
‍

Why this trade deal is great for the UK

From financial services through to automotive manufacturing, the deal protects high quality jobs and investment right across the UK. And people will be able to continue to buy goods from Europe tariff-free, protecting consumer prices. This will be fantastic news for families and businesses in every part of the UK.

Our trade deal is also based on international law, not EU law. There is no role for the European Court of Justice and no requirements for the UK to continue to follow EU law. All of our key red lines about returning sovereignty have been achieved.

We will have full political and economic independence on 1st January 2021 and our laws will be determined by our own elected politicians.

This trade deal recognises UK sovereignty over our fisheries

Importantly, this trade deal recognises UK sovereignty over our fishing waters and puts us in a position to rebuild our fishing fleet and increase quotas, overturning the inequity that British fishermen have faced for over four decades.

From 1 January 2021, it ensures the full return of powers over our coastal waters as well as an immediate 15% uplift in quota shares for priority stocks of fish to the benefit of the UK fleet and coastal communities.

This fisheries agreement upholds our rights as an independent coastal state under international law and ensures we will take back control of our waters. That was our fundamental aim going into negotiations, and this agreement means we leave behind the hated Common Fisheries Policy.
‍

Keir Starmer ‘led the charge’ in the Labour Party to support Remain. As Shadow Brexit Secretary, Starmer demanded a second referendum “whatever the outcome”, and said Labour would campaign to Remain in the EU.

Since then, he has voted 43 times to frustrate Brexit – either by voting directly against it, voting for ‘wrecking amendments’, or voting against statutory instruments designed to deliver Brexit.

And the SNP are joining in, continuing to play politics with the future of the Union by planning to vote against the deal. It shows that they are willing to risk Scottish jobs and the economy for political posturing, putting their own narrow self-interests above those of the Scottish people.

Nicola Sturgeon said it was time for Scotland to become ‘an independent, European nation’ after we reached an agreement with the EU. She has transparently been using our Brexit deal to push the divisive case for Scottish independence.

Boris Johnson’s deal lets us get Brexit done, and enter the New Year as a fully sovereign nation. This deal takes back control of our laws, borders, money, trade, and fisheries.

Now having delivered Brexit, we have secured a trade deal with the EU in just over a year. Only the Conservatives are capable of unleashing the great potential of this country.