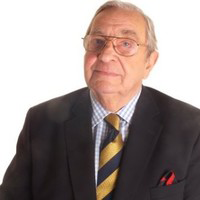 It is with great sadness that we inform you of the passing of Mr Barry Whitaker, Barry served the Bradford Conservative Association as both Chairman and President and was a well-known member of the Conservative party for decades in Bradford and beyond. Barry was known across all political parties in Bradford and was well respected and liked by those who met him.

Barry was also active in the textile industry in Bradford and was involved with the Bradford textile society where he served as an officer. He cared deeply about the past, present and future of our city’s textile industry.

Barry was a true Bradford gentleman and a caring Conservative in every way.

We will miss his wise counsel and leadership as well as his great sense of humour which kept many a candidate and activist going.

His dedication to giving something back to the community was a major part of his values and he a fine example to those who wanted to enter public life.

As a Thornton resident, he was especially proud of his home Thornton Hall and the history connected to it.

We send Pauline and the family our heartfelt condolences and our thoughts are with them at this difficult time.

We will post the funeral arrangements as soon as we know them.